Diagnosed with juvenile arthritis at 20 months old, uveitis at seven years old, and Crohn’s disease at eight years old, Abby Ferraro had spent more days with pain than without in her first eight years of life. In fact, she was so used to being in pain, that she wasn’t even registering it as pain any more. Even on her bad days, Abby was optimistic and joyful. She knew that tomorrow would be a better day and that everyone has something to overcome in life.

One day, Abby woke up pain-free. She realized that all the times she thought she was feeling good; she still had pain and nausea…until now. Now that she was feeling great, she was so overjoyed that she didn’t know what to do with herself. She always had a lot to say and has NEVER won the quiet game, but she had even more to say than normal and found herself wanting to tell her story. She sat down at an old Surface, started typing, and became an author at eight years old.

Abby’s joy comes through in her detailed description of living with juvenile idiopathic arthritis, uveitis, and Crohn’s disease. Abby discusses her road to each diagnosis, what she has learned, and how chronic disease has impacted her life. 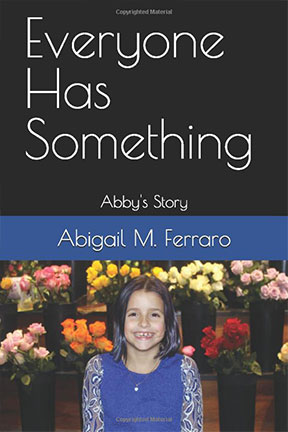 “I have a daughter the same age who also struggles with JIA. It is fabulous that Abby took the time to write a book about her experience. Often families feel isolated after diagnoses such as Abby’s, and their children also feel that isolation. Abby’s Story helps kids see that they are not alone, and her journey might help paint a picture of hope for kids early in their diagnosis. This family demonstrates perseverance and shows what true advocates look like."

“Love the way this book is written, first hand from the view of a child who has been through it! Gives great perspective on how Abby, her parents, and her doctors dealt with her symptoms, testing, treatments and much much more! Easy to read for a young child yet gives enough info for an adult seeking some guidance!"

“We absolutely love this book! It’s written by a young girl who is very brave and tells her story so well from a her own perspective! We absolutely think it’s awesome to have a book written by a child for another child to make their disease or illness relatable."